For more than a century, converse have transcended the sports scene and become a must-have for any wardrobe. And to make wearing them every day a pleasure, designers are constantly painting converse in line with seasonal trends and topical prints. We’ll show you exactly which ones in this feature. 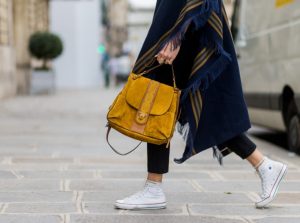 Converse sneakers were originally only available in black, with the only decorative element being a round emblem, rumoured to protect the ankle from impact and damage. In the post-war period, converse fans, who weren’t just basketball players then, asked the brand’s management to diversify the colour scheme. In response, the popular Chuck Taylor All-Star was dyed in seven different colours, and available in clear and neon. For large-scale modernisation of the conservative sneaker manufacturers decided only half a century later: for their 100th anniversary converse were “dressed” in various prints, which became an effective way of self-expression of American sneaker owners. 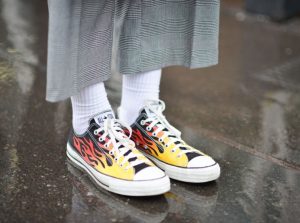 The limited-edition Chuck Taylor All-Star collection, released in 2008, featured the faces and icons of the music headliners of the ’90s who made Converse the premier ‘old-school’ shoe. These include Ozzy Osbourne, who got a monochrome model with caricatures, Pink Floyd, for whom a version with their album cover has been released, and Kurt Cobain, whose named sneakers duplicate lines from his personal diary. Gorillaz, who also received named sneakers, made a reward for the brand three years later in the form of Converse’s own designs, which sold out almost a week after the official launch.

The first ‘musical’ collaboration was followed by collaborations with major fashion houses in America and Europe, leading to brand new Converse designs. But in 2010, the brand returned to popularise the iconic Chuck Taylor All-Star, which, thanks to a collaboration with Missoni, was given an ethnic twist in a zig-zag pattern. The tandem’s successful debut didn’t let the partnership end and gave the world some more unusual collections, with the emphasis on both brands.

Converse’s design history also includes a collaboration between the brand and Japan’s Comme des Garçons, which resulted in Rei Kawakubo’s signature leather and canvas print trainers. The big-eyed shoe has become one of the favourites among Converse fans, and is worn as often as the classic white Chuck Taylor All-Star.

Alessandra Ferreira, founder of Brazilian brand Isolda, has also added exoticism to her sneaker designs. In collaboration with Converse, she created juicy, colourful sneakers that were particularly popular during the period when floral prints were popular. Unfortunately, they are only available in South America. 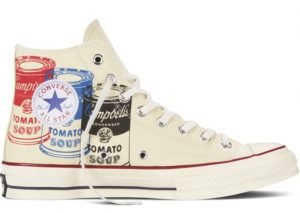 It’s worth saying that even despite the relative success of the above models, Converse’s most high-profile collaborations have been with the DC and The Simpsons labels. To celebrate the 25th anniversary of the history of the yellow men, the Chuck Taylor All-Star came out in several colours dedicated to each member of the Simpsons family. The men’s white and blue trainers featured Homer exclaiming the phrases “D’Oh!” and “Woo Hoo!”, the women’s trainers featured Marge, Lisa and Maggie, while the children’s trainers in turn featured Bart writing the words “I won’t waste chalk” on a board. The limited-edition cartoon collection was wildly popular, not only for its nostalgic vibe and beloved characters but also for its affordable prices, ranging from $37 to $65 a pair.

In 2014, Converse superhero sneakers were released with portraits of Justice League members Batman, Superman, Flash and Wonder Woman. For supporters of the dark forces, a model with the face of the Joker was released, remade this summer when the role of the character was taken over by actor Jared Leto. His movie sweetheart, the insane Harley Quinn, played by Margot Robbie, also got her own pair of trainers, as did the other members of Suicide Squad, for whom comfortable shoes are the key to a successful mission. 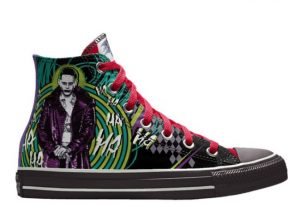 Converse strikingly combines conservatism and trendiness, adding time- and fashion-inspired imagery to its iconic sneakers. The brand has never claimed high status or an elite segment, largely focusing on the masses, but at the same time has managed to retain the exclusivity of its models, set in 1908 by Marquis Mills Converse himself. Either way, the value of a sneaker is measured not by the artwork on it, but by its practicality and versatility. This is evidenced by perhaps the best Chuck Taylor All-Star print in the form of scuffs and distressing, created by the loving wear of the brand’s loyal fans. 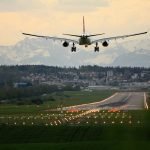 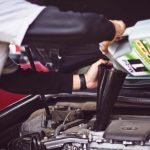