The origins of the Air Wings and Jumpman logos.

Nike Jordan sneakers have been very popular in recent decades, so many have noticed logos with the figure of an athlete and a ball with wings. We tell you about how these trademarks were created and what problems Nike had because of copyright infringement.

How was the Jumpman logo created?

In 1984, Michael Jordan participated in a photo shoot for American Life magazine before the Olympics in Los Angeles. Then a student at the University of North Carolina, Michael found himself in the lens of photographer Jacobus Rentmeester, who created a photo report with American athletes.

In one of the pictures, Jacobus captured his legendary pose of jumping for a basketball, which in the sport is called a grand jete. But there was one nuance: Jordan was wearing New Balance basketball sneakers, not Nike, during the photo shoot.

In 1985, the basketball player signed a contract with Nike, and then his first named model of sneakers came out. The brand wanted to create a distinctive logo for Michael’s collection and decided that the pose from the magazine photo would be perfect for that. But the copyright law and the presence of another brand’s sneakers in the photo made it difficult.

That same year Jordan was photographed in that pose again, only he was wearing Nike sneakers. The brand paid $15,000 to Rentmaster for the right to use color deposits with his picture. And for many years, the photographer was fine, but in 2015 he decided to sue the brand. Jacobus was unsuccessful in proving copyright infringement, and the court repeatedly dismissed his claims.

The company tried to add Jordan at the bottom of the logo, but it was soon removed.

Who came up with the Wings logo and how?

However, the Jumpman logo was first used only in the model that was released in 1987. The first sneaker models used the Wings logo, which means wings. It is still present today on Jordan Brand retro models. Peter Moore and Rob Strasser invented the basketball with wings. After meeting with Michael Jordan’s manager and deciding to cooperate further, they named a line of Air Jordan sneakers after him. And then they drew a ball with wings.

One event preceded this: Peter and Rob flew on an airplane where the flight attendant gave the child plastic wings. Moore asked for the same wings for him. While redrawing them on a napkin, he unconsciously drew a basketball to them. That’s how the second logo turned out.

“It’s a symbol of flight, it was part of Michael’s magic.
And obviously the Air Jordan 1.”

But it’s not just the logos that make the brand recognizable: for most of his career, Michael Jordan performed under the number 23, which is traditionally embroidered on the details of the brand’s sneakers. Another signature brand design is the Elephant Print.

In 1987, the legendary American designer Tinker Hatfield designed the third Jordan sneaker, which is considered one of the best to this day. These were the first sneakers to use the famous Elephant Print. “Elephant” print is still used in production today. It is a color combination that externally resembles the coloring of an elephant in an approximate form. 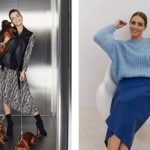 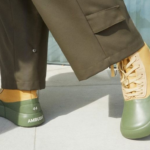